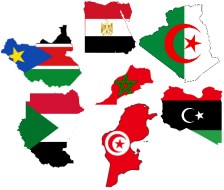 Education is not the biggest bottleneck to youth employment but it is a major one in Northern Africa. A lack of education and skills mismatches from Northern African universities are seen to be principal obstacles for young people in labour markets. A lack of proper training is the third most cited reason by young people from North Africa why they do not find jobs. With specific reference to North Africa, and Africa in general, the chances of being wage employed rather than in vulnerable employment are significantly higher for young people with more education. For those in employment wages are higher. Among those with higher education the unemployment rate varies by type of educational degree. Discouragement and being out of the labour force are higher among young people with no, or only a little, education.

What do students study? University graduation rates for Northern African universities are as follows: